Heath joins protest against ban on cheese advertising to children

David Heath has co-sponsored Early Day Motion 591, tabled by his Liberal Democrat colleague Dan Rogerson MP, which protests against the ban on the advertising of cheese to children.

The cheese industry is set to be hit by new OFCOM regulations which will restrict television advertising of food and drink to children under the age of 16.

The products that are to be restricted are defined by the Food Standards Agency Nutrient Profiling model, which categorises products based on portions of 100g.

This is far cheese more than a typical person eats. As a result, cheese is classified as a ‘high fat high salt’ product and cannot be advertised to children.

The FSA maintains that their aim is to encourage companies to reformulate their products to conform to the new regulations. This may be possible for highly processed products but for cheese, a natural product, this is impossible.

David Heath said: “This is just another example of the disregard with which this Government views the dairy industry. At a time when dairy farms in this country are closing in record numbers, the Government chooses to attack the cheese industry.

“Cheese is not a junk food. Some people may have issues with their diets but the average 28g of cheese a day that British people consume is not the problem.

"Cheese is a fantastic source of calcium and protein for children and adults alike. The model the Government is using is fundamentally flawed. How can cheese be banned when fizzy drinks, with no nutritional value at all, remain on children’s menus?

“The West Country produces some of the world’s finest cheeses and many people depend on the industry for their livelihoods. I’m extremely partial to a bit of cheese myself and I certainly won’t be denying my children the pleasure of a cheese and pickle sandwich.”

Heath and Lennox team up to fight Trident decision 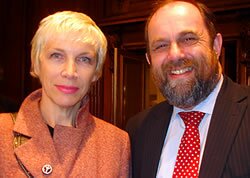 David was in some celebrity company. He was followed at the microphone by Eurythmics singer Annie Lennox, pictured right, fashion designer Vivienne Westwood and Bianca Jagger.

The Liberal Democrats were joined by 95 Government rebels in rejecting the Government’s proposals. The Prime Minister was forced to rely on the support of the Conservative Party to make sure that this part of his increasingly tarnished legacy made it past the House.

Mr. Heath is deeply concerned that the Government’s decision to replace Trident will prevent Britain from playing any constructive role in multilateral disarmament talks, particularly at the 2010 review conference.

Taking a decision on replacing the Trident submarines now pre-empts the outcome of those talks and could cause them to fail. It will show the rest of the world that the UK is not serious about negotiating away nuclear weapons.

The Government should have waited until 2014, when a decision on the future of Britain’s submarines is required, according to experts and the Commons Defence Select Committee.

David Heath is calling on farmers in his constituency to fill in their claim forms as soon as possible for this year’s (2007) Single Payment Scheme (SPS).

The system is in chaos and Mr. Heath is still dealing with some claims from 2005, such is the state of disarray.

By way of compensation for the losses suffered by many farmers as a direct result of the fiasco surrounding the SPS, the Rural Payments Agency (RPA) has offered to pay interest on late payments at a rate of LIBOR +1%.

Farmers are not obliged to accept their offer of compensation and may claim through the Parliamentary Ombudsman. The Ombudsman is taking the complaints seriously but many claims have been delayed by claimants being unable to quantify the losses which resulted from late payment of the SPS.

David Heath MP said: “The Government has made a horrendous mess of the Single Payment Scheme (SPS) to farmers. I am still dealing with claims from 2005 now. I would, therefore, urge any farmers in my constituency to start thinking about filling in claim forms for 2007 as soon as possible.

“I am appalled at the financial hardship suffered by many farmers as a direct result of SPS payments being late or miscalculated. Many have had to forgo buying vital livestock and equipment when needed and others have been forced into borrowing money.

"I would urge any farmers who do not feel that they have had a reasonable standard of service from the Rural Payments Agency (RPA) to make a claim for compensation through the Parliamentary Ombudsman.”

Passport centres more than a day's travel by public transport

David Heath has discovered how difficult it would be for people living in the northern part of his constituency to visit a passport interview centre, something that is now required of all first-time adult applicants for a British passport.

Mr. Heath’s findings follow yesterday’s Adjournment Debate in the House of Commons on a ‘passport interview centre for Taunton’, which was introduced by Mr. Heath’s Liberal Democrat colleague and MP for Taunton, Jeremy Browne.

Mr. Heath sympathises with Mr. Browne’s constituents but is also keen to point out that many of his constituents will simply not be able to make it to and from a passport interview centre in a single day on public transport.

David Heath said: “People in Somerton and Frome who have to travel to a passport interview centre are going to face a difficult challenge under the Government’s current proposals. The nearest centres are in Yeovil and Bristol, both of which are quite a distance from people living in the northern End of my constituency. Even if they have access to a car, it is the best part of an hour to Yeovil and over an hour to Bristol.

“If you don’t have access to a car, however, the situation becomes very bleak indeed. Using my own village of Witham Friary as an example, I discovered that it would be impossible to get to and from the passport interview centres in Yeovil or Bristol in a single day, even using the best possible route on public transport.

“The Government claims that no one should have to travel for more than an hour to attend a passport interview and that they would provide remote facilities for people to give evidence via video link if this was the case. I would suggest, therefore, given my calculations, that an obvious candidate for hosting these remote facilities would be Frome.”

Mr. Heath has also put in two written parliamentary questions to the Home Office to ask:

Mr. Heath was also appalled to learn that the County Councils of Devon and Cornwall had been consulted at length on the issue of passport interview centres but Somerset County Council was not.

David Heath said: “I am disappointed that the Government did not consult Somerset County Council before deciding on the location of the passport interview centres and I have written to them asking why they did not do so. It may explain why there are three centres in Cornwall alone but only one in the entirety of Somerset and Dorset – the one in Yeovil.”

Process of Lords reform must be speeded up, says David Heath

David Heath has called for the Government to be speedy in its pursuit of reform of the House of the Lords during Leader of the House Questions today after last Wednesday’s historic vote in favour of an entirely or predominantly elected upper chamber.

The Leader of the House, Jack Straw, promised to reconvene the Cross Party Group on Lords reform, of which Mr. Heath is a member, and discuss the possibility of a draft bill as soon as possible.

David Heath said: “I was delighted at the surge of radicalism that swept through the House during the votes on Wednesday. The result means that the long-overdue reform of the upper chamber of the British Parliament can be begun, nearly one hundred years after it was originally proposed.

“I wanted to take my opportunity during Business of the House questions to make it clear to Mr. Straw and the Government that they should not dawdle in reforming the House of Lords. After so many years of debate, it is now the time for action. The Cross Party Group should be reconvened before Easter and clear legislation should follow in the next session of Parliament.”

Packaging typically costs a family £470 each year, one sixth of their food budgets, according to the Government’s own Waste Resources Action Programme.

David Heath said: “It is worrying that over half the household waste produced by homes in Somerset every year is from packaging. It costs families the equivalent of two months’ grocery bills just to pay for throw away wrapping and packaging.

“Local Liberal Democrats are backing this bill that will make large stores like Tesco, Sainsbury’s and Asda accept packaging returned by customers. The aim is to get retailers to put pressure on suppliers to cut packaging with the result of less waste. This is good for the environment, good for council costs and good for waste disposal.”

Commenting after presenting the Retail Packaging Recycling Bill to Parliament, Andrew Stunell, said: “Commercial wrapping and packaging is very difficult to recycle, particularly at the household level, where quantities are quite small and very diverse.

“My bill puts the responsibility back on the retailer. They will soon find out just how difficult much of it is to recycle because of different materials being bonded together.

“Similar laws in Germany and Switzerland quickly resulted in retailers putting pressure on suppliers and manufacturers to cut down on packaging, saving both money and land-fill.” 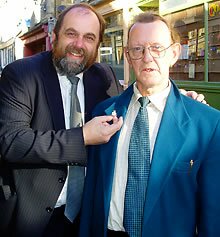 David Heath has been encouraging all veterans who served in the UK Armed Forces before December 31st 1969 to apply for to a “Veteran’s Badge”.

David Heath is seen here with Mr Alan Gilbert, who served between 1966 and 1971, initially with the 1st Battalion Durham Light Infantry, and after 1967 with the 3rd Light Infantry.

Mr Gilbert undertook two tours of Northern Ireland and one in Cyprus, as well as other training tours.

If you served in the armed forces any time between 3rd September 1945 and 31st December 1969, you may be entitled to a Veteran’s Badge.